What Ever Happened to Trainer Leaf?

Be aware that this article delves into headcanons and theories. They're my own interpretation of canon, and as such you're free to disregard them to your heart's content.

Pokémon Ruby and Sapphire were met with a lot of criticism upon release. Due to limitations in the hardware and coding of the games, you couldn't trade your Pokémon from Red/Blue/Yellow or Gold/Silver/Crystal to the new games, and it made a solid 184 old Pokémon completely unaccessible. Even Colosseum's additions to the pool of available Pokémon offered no further Kanto Pokémon, and fans were left without their old favourites.

...That is, until FireRed and LeafGreen were released!

FireRed and LeafGreen were the first time fans had gotten remakes, and it was incredibly exciting. It had all the parts of Kanto we loved, but with better GBA graphics and a lot of fine-tuning to make the games even easier to play. Alongside the upgrades, new features were added, including a brand new area called the Sevii Isles, compatibility with Hoenn games and Colosseum/XD, and a brand-new female player character you could choose.

The introduction of Leaf was very significant. Women have been playing Pokémon games since the very beginning, and in the early days of R/B/Y and G/S you could only ever play as a male character. With Leaf you finally had the option to explore the original Kanto with a protagonist that more closely represented you, and it made her such an important character to so many people. As a successor to Kris (the female player character of Pokémon Crystal and the first playable female Pokémon protagonist), Leaf served a vital role in firmly continuing the new standard of always having a female playable option in the games.

In the fourth generation fans finally got the G/S/C remakes they were hoping for in the form of HeartGold and SoulSilver, and many people were eager to see if Leaf would cameo in these games, perhaps as the final boss of Mt. Silver for those who pick a female player character. Sadly, Leaf was nowhere to be found. Additionally, Lyra was introduced as the new female protagonist, meaning that Kris was also unfortunately left behind in Crystal.

In the fifth generation, Black 2 and White 2 had a special treat for fans: the Pokémon World Tournament. Many people were hoping for Ruby and Sapphire remakes at the time, and the PWT offered a place to fight all the gym leaders and champions from previous games with revamped and animated sprites. The champions you could battle included Red (the original player character) in his FR/LG appearance, so a lot of people also expected Leaf to be a possible opponent. Once again, however, Leaf did not make an appearance.

The seventh generation games had many callbacks and references to past games, and a big one was the appearance of Red and Blue (the original rival) with updated designs and Alolan-appropriate attire. This was revealed quite early on from trailers, so a big question was whether Leaf would finally make a new appearance in a new game. Unfortunately, she did not.

From an outside-world perspective, it's saddening that Game Freak will not include Leaf despite the repeated appearances of Red in battle facilities and other media. She has no animated appearances, no merchandise, nothing, whereas any Pokémon fan is likely to know who Red is from all the merch and attention he gets. Leaf is just as important a character as Red, and the neglect and presumed non-existence she's been demoted to just doesn't feel right.

However, with all the meta sadness aside, we can form several theories in-universe on where Leaf is and why.

#1: Leaf is just relaxing in the Sevii Isles.

The Sevii Isles were solely an addition to FireRed and LeafGreen and are inaccessible in HeartGold and SoulSilver and other future games, so it's possible for her to have built up a nice holiday home with her Pokémon. One can only hope.

#2: Alternate universes are canon, and that's where Leaf is.

Sun and Moon confirmed that despite remakes (e.g. OmegaRuby and AlphaSapphire) the original universes and characters still exist, since Anabel arrived from the original Ruby and Sapphire universe through a wormhole. It's possible that Leaf is in a universe where she exists and Red doesn't, and that there's no way for her to access the current canon Pokémon world. Unless Game Freak is exceptionally kind, of course.

Now, I'm aware this is the least likely to be truly canon, but the thing with headcanons is that that doesn't matter and you can follow your heart.

HeartGold and SoulSilver chronologically take place three years after FireRed and LeafGreen, and have Red as the final battle of Mt. Silver no matter what. Considering how similar Leaf and Red look, it's possible that Leaf transitioned into Red in those three years and is now living as his true gender permanently. Additionally, since Red rarely ever speaks, it could be that he has some dysphoria about how his voice sounds.

Alternatively, you could go with the reverse: in any one game, Red wishes to transition into Leaf but is unable to as of yet. The exception is when you play as Leaf in FireRed and LeafGreen, and she begins her Pokémon journey as the person she truly is.

But of course, these are all just theories. Whatever the case, I sincerely hope Leaf returns in a future game one day, or at least gets some form of official recognition. Please, Game Freak, give her and Kris the attention they deserve!

A surprising amount of things can happen in a year, let alone a year and a half!

I'm thrilled to say that The Pokémon Company has been exceptionally kind to Leaf in the time since I last updated, having unveiled three new things featuring her, and even adding her outfit to Pokémon Go for female avatars. I can't fully put into words how much this means to me, but I can say that watching E3 live in June of 2018 and suddenly seeing her hop onto the Smash Bros. stage just about brought me to tears. All of my friends were messaging me and everything! 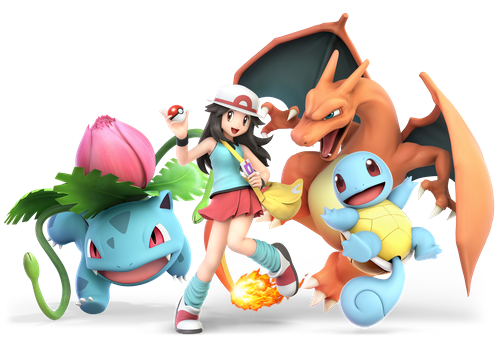 In October of that same year, an ARTFX figurine for Leaf was announced. Her first ever tangible merch...! 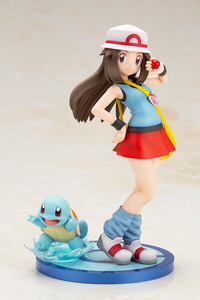 And finally, upon the release of Let's Go Pikachu and Let's Go Eevee, those who completed the games were treated to a battle with a new but somewhat familiar trainer.

Green from Let's Go may not be entirely Leaf, but she is definitely an homage to both her and the unused female trainer from way back in R/B/Y. She even has the same pose as Leaf's battle sprite in FR/LG!

Waiting for Leaf to return felt like forever, but I'm extremely happy that she finally did. I've no doubt that Game Freak will continue to make plentiful references to Kanto and especially Red, but I also hope they will keep remembering Leaf, too.