Why I Love Nosepass

Prelude: The Nose Behind the Legend​

Nosepass is one of the Pokémon that people consider to be more unusual. In a series that contains object-based Pokémon (like Magnemite), "humanshape" Pokémon (like Machoke), and creatures made of living stone (like Onix), Nosepass manages to combine them all into one essence: a creature made of stone, based upon objects that resemble humans. Distinctly human-esque, but also very distinctly not human at all. In an objective sense, it makes sense that some people would find this combination of traits to be a bit too uncanny to stomach.

But, what about those who don't? What about the man dedicated enough to create an entire webspace themed around one nosey boy?

Prepare yourself... for a legendary journey... unlike any other...!

Nosepass, in no small exaggeration, had a bit of a rocky start in life.

The Nosepass whom appeared in its debut game of Ruby and Sapphire is not the same Nosepass that we know today, and the rough design of its original sprite did not garner much appeal with fans. With its forehead tall and round and smooth, it brings to mind the image of a balding old man. Its jagged orange nose, the cracks or edges running through its body, and the smooth but harsh brow line make it feel somewhat antagonistic. Befitting of a Pokémon that serves as the first "boss" in the game, but altogether lacking polish.

This was not the Nosepass that was meant to be. And, even in the promotional material, the guidebooks and the outside Pokémon medias at the time, its true form was already in sight.

CHAPTER 2: Aesthetics; The Magnet That Draws You In​ 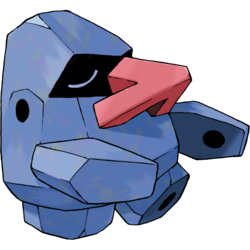 The relief? Palpable. My skin and crops? All clear and watered. This is what peak performance looks like.

We go from a palette with harsh greys and sharp orange, to a softer and more subdued one. A soft greyish blue, almost purple in tone, with a gentle and ashy pink nose, tied together by accents of black (or dark grey, depending what image you look at). Even just the palette of Nosepass brings me joy. I find it to be comfortable, stylish, and appealing.

I'm very fond of palettes that combine dark blues with warm colours, and Nosepass accomplishes that in a very simple but effective way. The colour design of nosepass could be seen as humble, and yet it draws attention to everything it needs to. Rather than a uniform blue colour throughout, the splash of pink gives its nose special attention and emphasis, immediately drawing you to one of its most prominent features. Its "mask" surrounding its eyes further helps to emphasize the detail of its nose, and ensures that its eyes, a focal point of how its personality is conveyed, are not merely lost in a sea of blue.

Nosepass' masky eye crevices serve a few key functions in its design. The shape of it conveys facets of Nosepass' rocky edges very clear and concisely, and the clarity and sharpness of the edges of the mask, the unnatural rock-like shape, prevent it from being perceived as furrowed brows. Although Nosepass' eyes are closed by default, the change to its eye mask here as opposed to its R/S/E sprite helps its expression feel more neutral, rather than antagonistic. While it is certainly still a personality that's up to interpretation, this very effectively guides it in a direction that's less harsh.

Nosepass' overall shape becomes more short and stout in its official artwork, compressing it down and widening it slightly. Ironically, this makes it feel more round in overall body shape than the R/S/E design that had smooth edges. 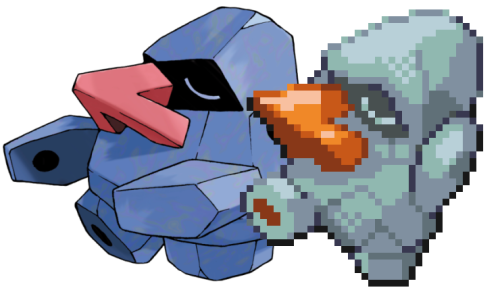 Even its legs became shorter and stumpier, and objectively much more cute. Everything refined, sharpened, and enhanced, like an ore into a polished gemstone.

Although this section contained several comparisons between modern Nosepass and its R/S/E design, I hope it is apparent just how much I value its design even without the contrast of its former self. Although people who dislike Nosepass complain that its nose is too large, I think that it's just right. I think that Nosepass, as it is now, is perfectly in proportion with itself. It is short, and stout, and a bit chubby in shape, and it is my friend.

The origins of Nosepass, in its moai basis and compass-point nose, are pretty ingenious. The nose itself is even shaped like an arrow, to such ends that it only has one nostril to emphasize this! I don't have too much else to add in terms of Nosepass' real-life inspirations and bases, but it is worth noting that I think the thought behind it all, and the way everything comes together into one coherent design and creature, is very neat.

CHAPTER 3: Lore of the Ore; A Living Creature​ 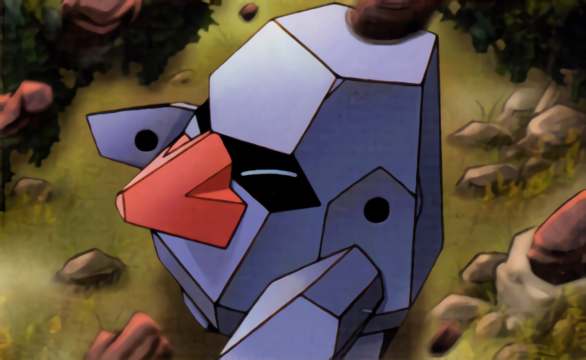 A key basis of Pokémon is that you journey together with them, and get to know your companions through your travels and the battles you face. I think every Pokémon is made to be likable in some way, and that even if it doesn't particularly shine within battle-based environments, there's always something more to them.

The reasons of why I became drawn to Nosepass are a bit personal. As a child, I struggled to thrive in any form of social environment, and I often felt like the one person hated by all his peers. When people would scrutinise me and ridicule me for things I thought were innocuous, it made me feel like I wasn't human. Something that looked human, perhaps, but whose guise would immediately be seen through by actual human people. I developed a habit of always siding with the underdog, of giving unpopular fictional characters the empathy that I desperately wished people would give me.

Of course, I was a very silly and sometimes unpleasant child and teen, but I don't think anyone deserves to be bullied for that.

In the early 00s internet communities I frequented, Nosepass hate was all too common. At first I would join in with the vitriol and bashing, but eventually... I gave Nosepass a chance. And I think, in some way, I realised that I could relate to the way it was treated. I would draw pictures of it, giving it happy eyes and putting it in fun situations where it could eat snacks and play and have fun, and I grew more and more fond of it. 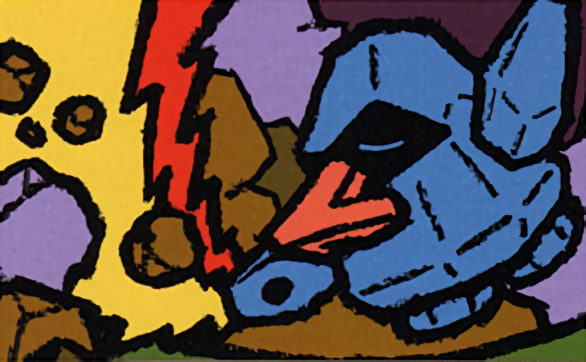 There's blanks in my memories, but I remember the particularly good moments. A close friend sent me a Nosepass plush in 2009, and that was probably one of the first Nosepass things I ever owned. Growing up with very little money and being unable to purchase goods online, it was a dream come true for me. The Nosepass plush (a UFO Banpresto Nosepass) is named Palmer, and is still with me to this day.

Days and months lamenting the fact that Nosepass wasn't available in Pokémon Black and White, only to erupt in screams and overexcited gifs on social media once Nosepass was confirmed to be in Pokémon Black 2 and White 2. Friends who played the game much quicker than I could, going out of their way to trade me Nosepass so I could have it in my party early.

Losing my mind in a cascade of capslock and more enthusiastic gifs and hollering when screenshots of Nosepass in Pokémon X and Y surfaced on the internet, and the absolute joy of seeing Nosepass look so great in 3D.

Playing with Nosepass in Pokémon Amie for the first time, and thinking that its <> face was an unhappy one and that petting its nose was strictly forbidden... but as it turns out, patting the nose is the most desired result! Seeing it dance with happiness after being petted, or after it ate a tasty PokéPuff with its nose orifice. Playing countless minigames just to get the best possible PokéPuffs for my companion.

Hatching so many Nosepass eggs once I reached the Daycare Center in X and Y, and committing so many Wonder Trades, that my PokéDex was nearly entirely complete at 2 badges before I acquired a beautiful shiny baby. Dutifully raising said shiny baby with all of the Super Training minigames, so she could be the best shiny Nosepass to ever nose pass.

The careful shuffles from one foot to another that Nosepass does during its idle animation in the 3DS games, and how its in-game cry changed to be more quiet and gentle. The fact that Nosepass in X and Y only appear in Horde encounters or in the Friend Safari, meaning they are always surrounded by a wealth of friends.

Starting a new HeartGold file, trading in a Nosepass egg, and being extremely delighted when the baby Nosepass could follow me around on the overworld. Being overwhelmed by just how adorable the little overworld sprite and animations were.

Painstakingly attempting to catch a wild Nosepass in a Beast Ball, while they continuously used moves like Rest and thwarted my efforts with their adorable sleepiness. The moment where I finally hatched a wonderfully unique shiny Nosepass contained in a Beast Ball, and giving her the fitting moniker of Beastmode. Taking her through the Alolan Pokémon League, and making her a true champion.

Experiencing a rush of excitement and adrenaline whenever Nosepass pops up in an unexpected place, such as a randomiser playthrough or on the internet. Being absolutely delighted whenever I come across a new, good piece of Nosepass artwork that I haven't seen before.

The list truly goes on. I don't know if I can even begin to list all the positive and happy memories I have regarding Nosepass...! 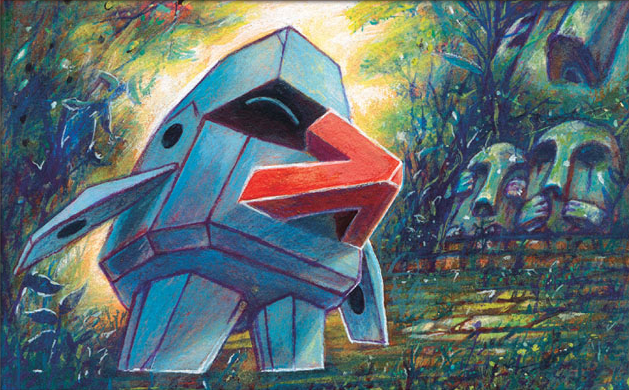 As far as Pokémon go, people may consider it a very unusual choice for an all-time favourite. But the magic of Pokémon is that any single Pokémon could be that Pokémon, for someone, because every person and every Pokemon are unique. The possibilities and circumstances that bring people and Pokémon together are so numerous as to be almost unlimited.

In the end, Nosepass makes me happy, and that's all it needs to be.